Every magnetic hard disk utilizes the effect of exchange bias (EB) in it’s read sensor. EB appears in systems where an antiferromagnet (here FeMn) is in direct contact with a ferromagnet (here Co). Without going into details, this phenomenon is investigated for many years without a detailed understanding and a satisfactory physical model.

In the task solving this issue, we performed x-ray resonant reflectometry (XRMR) and XMCD to find the uncompensated magnetic moments in the AF and to distinguish between pinned and rotatable uncompensated moments. We could clearly identify pinned and rotatable uncompensated moments, but the pinned ones are of unexpected purely orbital character. We found a model to describe this phenomenon by a local breaking of the spin-orbit-interaction between the spin and orbital moments of Fe. This loaded spin orbit spring provides a new and unexpected source for anisotropy energy. After this observation similar mechanisms should be also in present in many other magnetic systems (For details see Scientific Reports 6, Article number: 25517 (2016)). 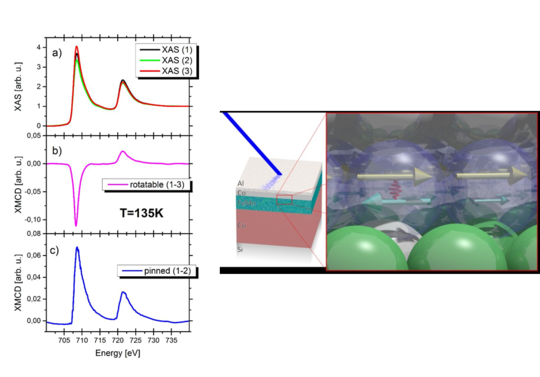 Left: Fe XMCD of the rotatable and pinned moments. Right: Atomistic model for the pinning mechanism, based on crystal field interaction and breaking of the local spin-orbit-coupling spring. (see Scientific Reports 6, 25517 (2016))