Hole patterns in magnetic materials, so called antidot lattices, on the nano scale exhibit a large number of novel phenomena. These are visualized and elucidated by a combination of cutting edge methods like scanning x-ray transmission microscopy (at the MAXYMUS end station at the BESSY II storage ring in Berlin) with magnetic contrast (XMCD) and first-order reversal curve measurements (as lab method). Thereby, phenomena like geometric frustration, e.g. spin ice behavior or three dimensional variations of the magnetization, can be investigated down to a lateral resolution below 20 nm. Apart from being of great interest for fundamental physics, antidote lattice can be used for the targeted engineering of the magnetic properties of a system. Systematic large scale investigations are realized by utilization of fast preparation and characterization techniques, like focused ion beam and magneto-optical Kerr effect measurements. 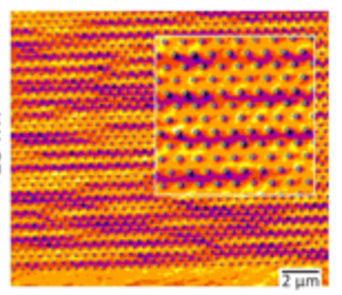 X-ray micrograph of the intermediate magnetization configuration during the magnetization reversal of a Fe antidot lattice. From: J. Gräfe et al. Physical Review B 93 (1), 014406 (2016). [ ] 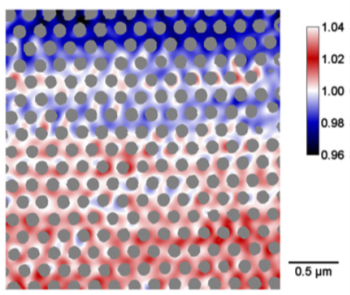 {Physical Review B}, 93(10), American Physical Society, Woodbury, NY, 2016 (article)
Abstract
While the magnetic properties of nanoscaled antidot lattices in in-plane magnetized materials have widely been investigated, much less is known about the microscopic effect of hexagonal antidot lattice patterning on materials with perpendicular magnetic anisotropy. By using a combination of first-order reversal curve measurements, magnetic x-ray microscopy, and micromagnetic simulations we elucidate the microscopic origins of the switching field distributions that arise from the introduction of antidot lattices into out-of-plane magnetized GdFe thin films. Depending on the geometric parameters of the antidot lattice we find two regimes with different magnetization reversal processes. For small antidots, the reversal process is dominated by the exchange interaction and domain wall pinning at the antidots drives up the coercivity of the system. On the other hand, for large antidots the dipolar interaction is dominating which leads to fragmentation of the system into very small domains that can be envisaged as a basis for a bit patterned media. 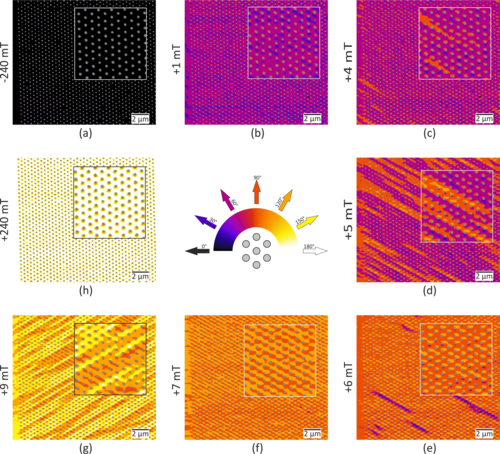 {Physical Review B}, 93(1), American Physical Society, Woodbury, NY, 2016 (article)
Abstract
The magnetization reversal in nanoscaled antidot lattices is widely investigated to understand the tunability of the magnetic anisotropy and the coercive field through nanostructuring of thin films. By investigating highly ordered focused ion beam milled antidot lattices with a combination of first-order reversal curves and magnetic x-ray microscopy, we fully elucidate the magnetization reversal along the distinct orientations of a hexagonal antidot lattice. This combination proves especially powerful as all partial steps of this complex magnetization reversal can be identified and subsequently imaged. Through this approach we discovered several additional steps that were neglected in previous studies. Furthermore, by imaging the microscopic magnetization state during each reversal step, we were able to link the coercive and interaction fields determined by the first-order reversal curve method to true microscopic magnetization configurations and determine their origin. 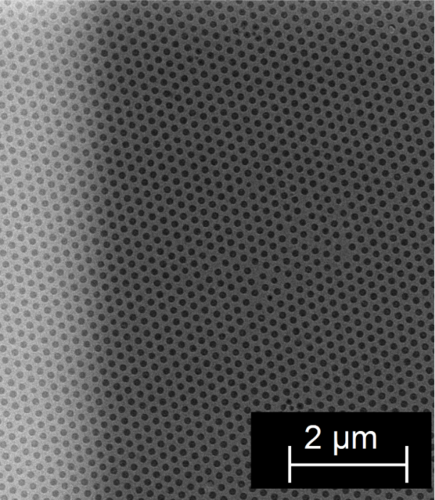 {Beilstein Journal of Nanotechnology}, 7, pages: 733-750, Beilstein-Institut, Frankfurt am Main, 2016 (article)
Abstract
We investigate the rich magnetic switching properties of nanoscale antidot lattices in the 200 nm regime. In-plane magnetized Fe, Co, and Permalloy (Py) as well as out-of-plane magnetized GdFe antidot films are prepared by a modified nanosphere lithography allowing for non-close packed voids in a magnetic film. We present a magnetometry protocol based on magneto-optical Kerr microscopy elucidating the switching modes using first-order reversal curves. The combination of various magnetometry and magnetic microscopy techniques as well as micromagnetic simulations delivers a thorough understanding of the switching modes. While part of the investigations has been published before, we summarize these results and add significant new insights in the magnetism of exchange-coupled antidot lattices. 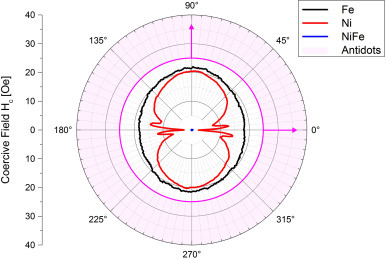 {Journal of Magnetism and Magnetic Materials}, 419, pages: 517-520, North-Holland, Amsterdam, 2016 (article)
Abstract
Antidot lattices can be used to artificially engineer magnetic properties in thin films, however, a conclusive model that describes the coercivity enhancement in this class of magnetic nano-structures has so far not been found. We prepared Fe, Ni, and NiFe thin films and patterned each with 21 square antidot lattices with different geometric parameters and measured their hysteretic behavior. On the basis of this extensive dataset we are able to provide a model that can describe both the coercivity scaling over a wide range of geometric lattice parameters and the influence of different materials. 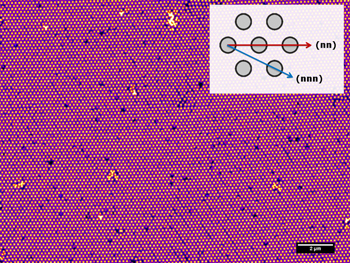 {Nanotechnology}, 26(22), IOP Pub., Bristol, UK, 2015 (article)
Abstract
Investigations of geometric frustrations in magnetic antidot lattices have led to the observation of interesting phenomena like spin-ice and magnetic monopoles. By using highly focused magneto-optical Kerr effect measurements and x-ray microscopy with magnetic contrast we deduce that geometrical frustration in these nanostructured thin film systems also leads to an out-of-plane magnetization from a purely in-plane applied magnetic field. For certain orientations of the antidot lattice, formation of perpendicular magnetic domains has been found with a size of several μm that may be used for an in-plane/out-of-plane transducer. 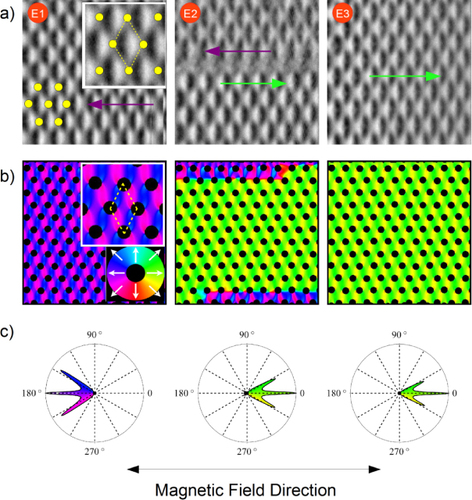 {Nanotechnology}, 24, IOP Pub., Bristol, UK, 2013 (article)
Abstract
We study the reversal mechanisms in a self-assembled, hexagonally ordered Fe antidot array with a period of 200 nm and an antidot diameter of 100 nm which was prepared by polystyrene nanosphere lithography. Direction-dependent information in such a self-assembled sample is obtained by measuring the anisotropic magnetoresistance (AMR) through constrictions processed by focused ion beam milling in nearest neighbor and next nearest neighbor directions. We show that such an originally integral method can be used to investigate the strong in-plane anisotropy introduced by the antidot lattice. The easy and hard axis reversal mechanisms and corresponding AMR signals are modeled by micromagnetic simulations. Additional in-field magnetic force microscopy studies allow the correlation of microscopic switching to features in the integral AMR. We find that the easy axis of magnetization is connected to a distinct periodic magnetic domain pattern, which can be observed during the whole magnetization reversal. While this process is driven by nucleation and propagation of reversed domains, the hard axis reversal is characterized by a (stepwise) rotation of the magnetization via the antidot lattice' easy axes.