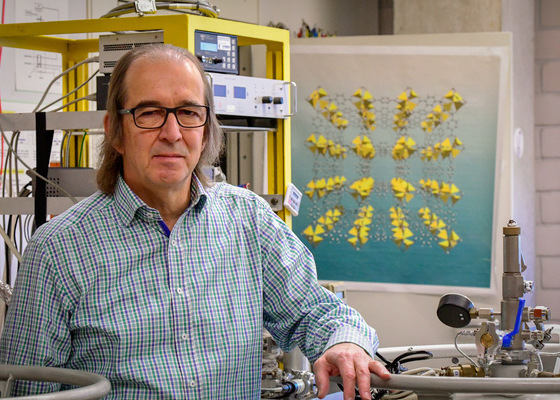 The head of the "Hydrogen Storage" research group at the Max Planck Institute for Intelligent Systems in Stuttgart, together with Ned T. Stetson, will lead one of the most important conferences in the field of hydrogen-material interaction. The core topic of the conference will be new hydrogen storage materials, understanding from atomic level to applications.

Castelldefels, Spain - Dr. Michael Hirscher, Head of the Hydrogen Storage Research Group at the Max Planck Institute for Intelligent Systems (MPI-IS) in Stuttgart, together with Ned T. Stetson, one of the leading scientists of the US-Department of Energy, will lead the 2019 Gordon Research Conference (GRC) Hydrogen-Metal Systems. It will take place in Castelldefels in Spain end of June, beginning of July. The main topics this year will be the storage of hydrogen in organic liquids and the interaction of hydrogen with different materials.

Chairing a conference is a great honour, only renowned scientists are nominated for this task. Chairs immensely shape the scientific direction of a conference. "For me it is also a recognition of my work to have been elected first as Vice Chair and now as Chair," says Hirscher, who in addition to his work at the MPI-IS was Operating Agent of Task 32 with the title "Hydrogen-based Energy Storage" in the Hydrogen Implementing Agreement of the International Energy Agency (IEA) from 2013 until the end of 2018.

Improving the delivery of hydrogen as an energy carrier

In the transition from an energy economy based on nuclear energy and fossil fuels as we know it today, to renewable energies, energy storage is the most challenging problem. Renewable energies such as wind power and solar energy are subject to strong daily and seasonal fluctuations. A possible solution: Energy can be stored in the form of hydrogen.

With today's technology, hydrogen is stored and transported as a gas under high pressure. A new way to safely transport large quantities of hydrogen is the use of Liquid Organic Hydrogen Carriers, in which hydrogen can be stored more densely than in high-pressure tanks. In addition, a liquid can be transported easier than a gas. The hydrogen, bound in a liquid, could, for example, be transported on ships from a sun-rich country to another. Hydrogen is then separated from the liquid at the point of use and can be used.

The 2019 GRC Hydrogen-Metal Systems conference will focus on hydrogen storage materials. Many high-ranking internationally renowned scientists in the field of hydrogen research will be speakers at the conference, including Serena DeBeer, Director of the Department of Inorganic Spectroscopy at the Max Planck Institute for Chemical Energy Conversion in Mülheim an der Ruhr, Katharina Brinkert from the California Institute of Technology and Peter Wasserscheid from the Friedrich Alexander University Erlangen-Nuremberg, who is researching Liquid Organic Hydrogen Carriers and was nominated for the Future Prize of the Federal Republic of Germany last year.

The Hydrogen-Metal Systems conference has been held since 1981. All participants are also invited to present posters on new and unpublished results in order to stimulate discussion in the evening sessions. Eight of the best posters will be selected and the respective researchers will give a short presentation on their research.

More information on the conference can be found here:

Dr. Michael Hirscher heads the "Hydrogen Storage" research group at the Max Planck Institute for Intelligent Systems in Stuttgart. He studied physics at the University of Stuttgart and at Oregon State University in Corvallis, USA. In 1984, he began his doctorate under Professor Helmut Kronmüller, at the time Director of the Max Planck Institute for Metals Research, from which the Max Planck Institute for Intelligent Systems emerged in 2011. In 1988 Hirscher was awarded the Otto Hahn Medal of the Max Planck Society for his work. Since 2013 he has been Operating Agent of Task 32 entitled "Hydrogen-based Energy Storage" in the Hydrogen Implementing Agreement of the International Energy Agency (IEA). During the International Symposium on Hydrogen & Energy in Switzerland he received the Hydrogen & Energy Award 2015. Hirscher was Vice Chair of the Gordon Research Conference on Hydrogen-Metal Systems in 2017 and will be its Chair this year. He is also Operating Agent of the new IEA Hydrogen Task 40 entitled "Energy storage and conversion based on hydrogen".

More information about Task 40 can be found here: http://ieahydrogen.org/Activities/Task-40.aspx