Deuterium from a quantum sieve

In future it may be easier for chemists, biologists and physicists to obtain the ideal substance with which to clarify numerous research issues. For the first time, a team of scientists from the Max Planck Institute for Intelligent Systems in Stuttgart, Jacobs University Bremen and the University of Augsburg have been able to apply a new method to separate hydrogen and its heavier isotope deuterium more efficiently than before. To this effect, they use a metal-organic framework as a quantum sieve to separate the isotopes. Deuterium serves to determine the structure of unknown substances, for example. Chemists also use it to investigate how reactions involving hydrogen proceed and thus create the basis on which to optimise the conversion. Biologists use deuterium to analyse metabolic processes, among other things. 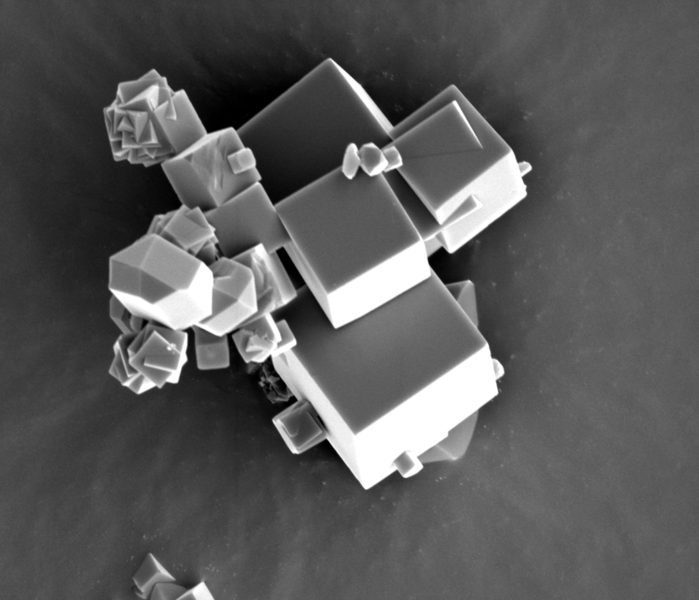 A sieve for molecules: The crystals of the metal-organic compound can be seen at a magnification of more than X6000 under the scanning electron microscope.
© MPI for Intelligent Systems


Deuterium is the heavy twin brother of hydrogen; however, it is more than 20 times rarer than identical twins. It accounts for only 0.015 percent of natural hydrogen and is twice as heavy as the light isotope. There is no chemical difference between the two isotopes: both deuterium and ordinary hydrogen react with oxygen to form water. Its double mass allows researchers to lay a trail to elucidate chemical reactions or metabolic processes, however. They dispatch a compound containing deuterium into the processes and analyse in which conversion product it turns up. And this is only one of the tasks that deuterium fulfils in research. It may even become an inexhaustible and climate-neutral fuel in future. This would be the case if nuclear fusion becomes so technically mature that energy is generated on Earth using the same process that also occurs in the Sun. This produces much less radioactive waste than nuclear fission.

In a cooperation established within the DFG German Research Foundation's priority program “Porous Metal-Organic Frameworks” (SPP 1362), a team of scientists from the Max Planck Institute for Intelligent Systems in Stuttgart, Jacobs University Bremen and the University of Augsburg have now been able to enrich deuterium contained in hydrogen more efficiently than with conventional methods. The findings are reported in the journal "Advanced Materials". The researchers discovered that a certain metal-organic framework, abbreviated MOF, absorbs deuterium more easily than common hydrogen at temperatures below minus 200 degrees Celsius.

Metal-organic frameworks are produced in a modular system in which porous materials can be specifically produced for special applications. “Meanwhile, there are thousands of these compounds, although most of them do not meet the high technical specifications regarding the stability,” says Dirk Volkmer. “With MFU-4 we have developed a family of porous materials which would also be attractive for industrial applications.”

“When we exposed this compound to a gas mixture containing equal parts of hydrogen and deuterium for a few minutes at minus 223 degrees Celsius, it absorbed almost seven times as much deuterium as hydrogen,” says Michael Hirscher, who conducted the experiments with his colleagues at the Max Planck Institute for Intelligent Systems. The researchers then released the isotopes again by heating the framework to above minus 200 degrees. In order to gain a better understanding of why the heavier deuterium enters the pores faster than its lighter brother, the Stuttgart-based scientists asked theoretical physicists headed by Thomas Heine, professor at Jacobs University Bremen, for help. 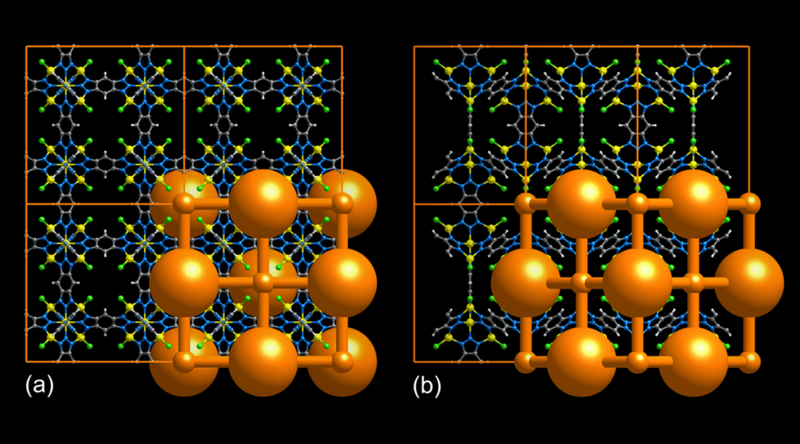 Structure of the metal-organic framework from different angles. The orange lattice in the foreground shows the volume accessible to gas molecules.
© University of Augsburg/Advanced Materials


Materials become quantum sieves at very low temperatures if they have narrow cavities. Two quantum effects then occur. One the one hand, the openings contract so much at temperatures below minus 200 degrees that even the incredibly tiny hydrogen molecules can no longer flow through them, but must tunnel through the opening which is de facto closed. Particles are only able to do this under conditions where the laws of quantum physics apply.

The fact that deuterium manages to get the better starting position is again down to a quantum effect: due to the characteristics of the quantum world, there is no complete standstill, even at absolute zero; this would mean that position and momentum, i.e. the velocity of the particles, are accurately known. This is forbidden by the laws of the quantum world, however, as it contains no absolute certainties, only probabilities. All particles thus have a zero point energy, and this is smaller for heavier particles than for lighter ones. Since heavy particles, figuratively speaking, do not move as much as light ones, they adhere better to surfaces at low temperatures. This means that more deuterium molecules than hydrogen molecules also sit at the openings of the metal-organic frameworks, and they are more likely to tunnel into them.

“We were able to use this experimentally to show, for the first time, that quantum sieving is a very effective method to separate gas mixtures and extract deuterium,” says Michael Hirscher. Previous methods, which utilised the different boiling points of the two isotopes, for example, enrich deuterium by a factor of a mere two and a half per separation cycle. The new method is thus two to three times more effective.

“Technical separation methods like quantum sieving require that porous materials with cavities of a desired size can be specifically produced,” says Dirk Volkmer. “It is precisely this condition which the MFU-4 family fulfils.” The materials could only be tested because the research team, headed by Michael Hirscher, had designed an apparatus in which they can analyse the stored quantities of different gases directly with the aid of a mass spectrometer.

They now want to use this instrument to investigate whether other metal-organic frameworks whose cavities and openings are larger or smaller would perhaps be even more suitable as quantum sieves for deuterium. “We also want to attempt to enrich helium-3 in this way,” explains Michael Hirscher. Helium-3 is the light sibling of helium-4; however, it is so rare that there are only 1.4 parts of helium-3 for one million parts of helium-4. It is sought after as a coolant mainly in science. It could also serve as the fuel for nuclear fusion and would then produce significantly less radioactive material in the future than nuclear fusion with deuterium. “I expect that we will also see a separation effect for the helium isotopes,” says Michael Hirscher. “We are not yet sure whether it will also be worthwhile to produce helium-3 industrially in this way, of course.” For the time being, this issue remains unresolved for hydrogen, as well as its heavier brother deuterium.