3D structure of skyrmions becomes visible for the first time

An international team of scientists was able to make the indestructible magnetic structures visible for the first time with the aid of a high-resolution X-ray microscope.

Stuttgart – Skyrmions are three-dimensional structures that occur in magnetic materials. They are magnetic vortices a few nanometers in size in which atomic elementary magnets are arranged in closed vortex structures. Skyrmions are topologically protected, meaning that their shape cannot be changed. First described in the 1950s by the mathematician Tony Skyrme, their three-dimensional structure is less than one hundred nanometers in size. It was thus not possible to make the structure visible – until now.

An international team of researchers has successfully tackled the challenge. The scientists are from the Max Planck Institute for Intelligent Systems in Stuttgart, the Chinese Academy of Sciences in Beijing, the Songshan Lake Materials Laboratory in Guangdong, the University of Oxford in Great Britain, the University of Messina, and the Polytechnic in Bari, Italy. Together, they were able to map the three-dimensional structure of Skyrmions for the first time. On February 8, 2019, the joint project entitled "Anatomy of Skyrmionic Textures in Magnetic Multilayers" was published in the scientific journal Advanced Materials. 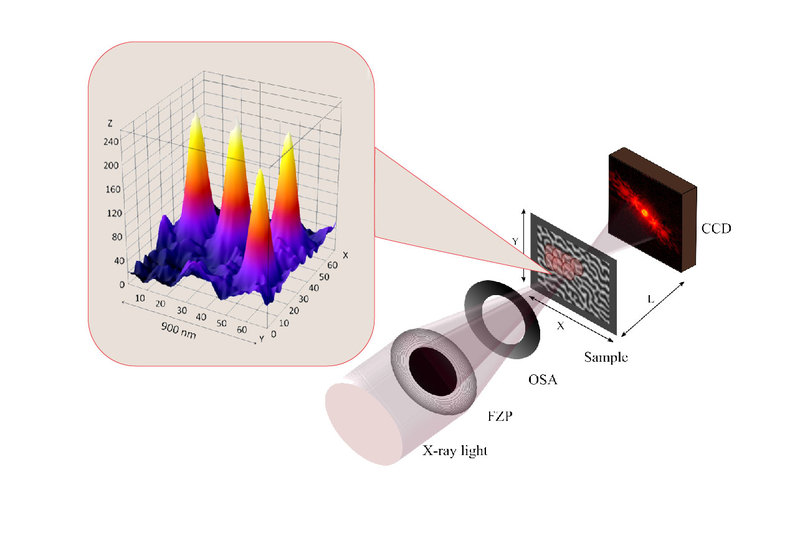 "To date, no one has ever seen the three-dimensional structure of Skyrmions," says Professor Gisela Schütz, Director at the Max Planck Institute for Intelligent Systems (MPI-IS) in Stuttgart and head of the Modern Magnetic Systems Department. "We are the first to get a high-resolution, three-dimensional image of this structure." Because a Skyrmion is smaller than 100 nanometers (~ 1000 times smaller than a human hair) the researchers use a method called ptychography for scanning transmission X-ray microscopy. "We achieve the best resolution for X-rays and are even highly sensitive to magnetic details. This was the only way to investigate the interior of magnetic Skyrmions," explains Schütz.

The researchers used MAXYMUS, a high-resolution X-ray microscope located at BESSY II, an 80-meter-wide synchrotron radiation source at the Helmholtz-Center Berlin that produces extremely bright X-ray light. This was followed at the RASOR station at BESSY's British counterpart, Diamond in Oxfordshire. The research team discovered that the three-dimensional structure of the Skyrmion is more complicated than expected.

"We found out that an interplay of four magnetic interactions lead to the formation of the 3D structure. But the simple dipole coupling is mostly dominant in contradiction to prior expectations," Dr. Joachim Gräfe explains, who leads the Nanomagnonics and Magnetization Dynamics Research Group at the MPI-IS. "The decoding of the real deometry is a prerequisite for the understanding and, therefore, the manipulation of the world-wide investigated Skyrmions”.

Understanding magnetic Skyrmions and their effects is particularly important for the development and future manufacture of spintronic storage devices. These magnetic spin-based electronics, which store information in Skyrmions, are considered less susceptible to interference and very stable because Skyrmion structures are topologically protected. "To use Skyrmions as data storage devices, you have to know the structure and all the effects," says Gräfe. "With our publication, we have taken basic research in this field one step further."

Professor Gisela Schütz is a Director at the Max Planck Institute for Intelligent Systems in Stuttgart, where she heads the "Modern Magnetic Systems" department. Her research interests include the application of synchrotron radiation in X-ray spectroscopy and microscopy, as well as the development of advanced spintronic/magnon systems and new supermagnets.

Schütz was born in Ottobeuren in 1955. She studied physics at the Technical University of Munich (TUM), where she received her doctorate in 1984 from the Chair of Nuclear Physics. It was also at the TUM that she started her research activities in the field of condensed matter with synchrotron radiation. She worked in several synchrotron laboratories and developed new methods for the investigation of magnetic structures and phenomena with polarized X-rays. After completing her studies in experimental physics in 1992, she became professor at the University of Augsburg in 1993 and was appointed professor at the Institute of Experimental Physics at the University of Würzburg in 1997. In 2001, Schütz became Director at the Max Planck Institute for Metals Research, now the Max Planck Institute for Intelligent Systems.

Dr. Joachim Gräfe heads the "Nanomagnonics and Magnetisation Dynamics" research group at the Max Planck Institute for Intelligent Systems in Stuttgart. The group is assigned to the Modern Magnetic Systems department of Prof. Gisela Schütz. Gräfe’s research concentrates on magnetization dynamics on the nanoscale, in particular magnonics, through the use of state-of-the-art X-ray microscopy.

Gräfe was awarded the renowned Ernst Eckhard Koch Prize and the Otto Hahn Medal of the Max Planck Society. He studied at the University of Leipzig and Cardiff University in the UK. In 2016, he received his Ph.D. at the MPI-IS, where he has been working as a group leader ever since.