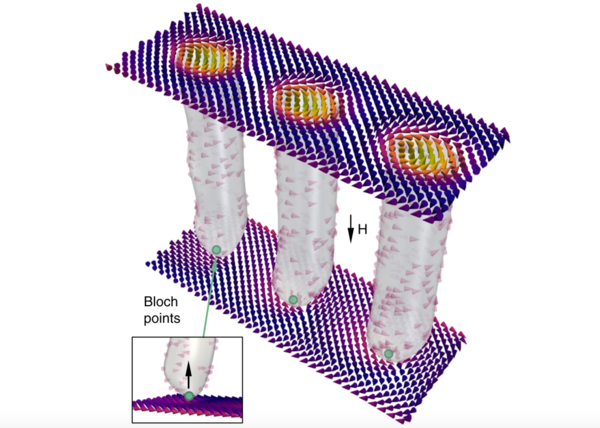 For the first time, an international team of researchers succeeded in demonstrating the previously unknown structure of magnetic skyrmion tubes in 3D. This knowledge makes it possible to better understand the formation and destruction of skyrmions and to use the magnetic structures in so-called spintronic storage devices.

Stuttgart – Scientists have never before succeeded in making so-called skyrmions – 100 nanometre small vortex structures that occur in magnetic material – visible in 3D. Previously, the 2D image was used to draw conclusions about the third dimension and it was long assumed that these small structures were exclusively circular.

An international team of researchers from Germany, Great Britain and France left speculations behind: the scientists wanted to know what shape a skyrmion really has. "What we have found is not a circular skyrmion, as had previously been assumed. In fact, we have discovered a skyrmion tube. No one before us has ever been able to prove this experimentally," explains Joachim Gräfe, head of the Nanomagnonics and Magnetisation Dynamics research group at the Max Planck Institute for Intelligent Systems in Stuttgart. 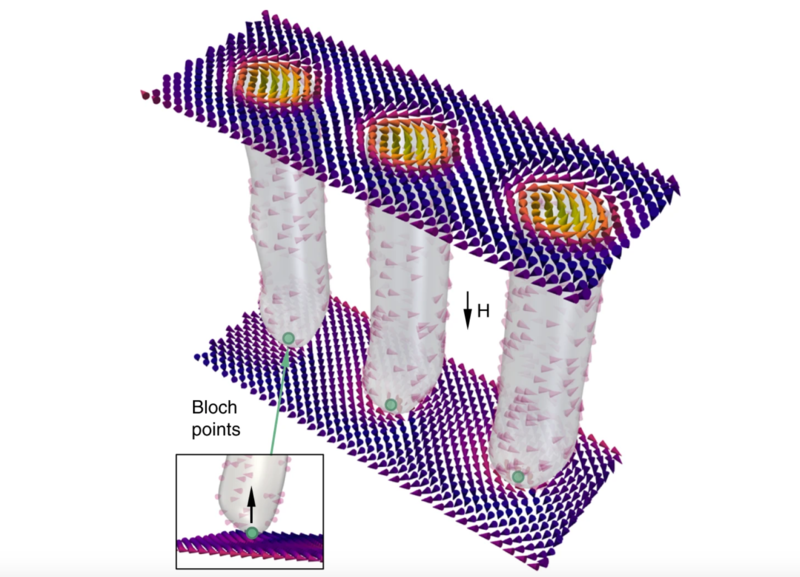 "We observed skyrmion tubes in real space with magnetic X-ray imaging for the first time and were able to confirm their structure with comparative micromagnetic simulation.” Gräfe's group was part of an international research project involving scientists from Durham University, the Universities of Southampton, Exeter, Warwick and Cambridge, the Helmholtz-Zentrum Berlin für Materialien und Energie and the synchrotron radiation sources BESSY II in Germany, SOLEIL in France and the Diamond Light Source in Great Britain. On April 7, 2020 the team published its results in the publication “Real-space imaging of confined magnetic skyrmion tubes” in the renowned journal Nature Communications.

The researchers used 120 nanometer thin iron-germanium lamellae in which they were able to visualise the 3D structures of the tubes. They chose iron-germanium (FeGe) because this is a crystal whose atoms are already arranged in a spiral. "This natural rotation in the crystal facilitates the formation of skyrmions, which are also twisted vortices," explains Gräfe.

Among other things, the high-precision instrument MAXYMUS ("MAgnetic X-raY Micro- and UHV Spectroscope") helped to make the hidden visible. MAXYMUS is a high-resolution X-ray microscope located at BESSY II, an 80-metre-wide synchrotron radiation source at the Helmholtz-Zentrum Berlin. Thanks to MAXYMUS, Gräfe and his team have made several groundbreaking discoveries. Like this time: the X-ray microscope imaged the tubes, which are only 70 nanometers in size. This corresponds to one hundredth of the diameter of a human hair.

"While skyrmions are usually depicted as two-dimensional objects, in reality magnetic skyrmions can be elongated, tube-like objects that extend through the material surrounding them. The study of this tubular structure – we call it the "skyrmion tube state" – is crucial to better understand skyrmion formation and destruction and thus to be able to apply it more effectively," says Gräfe.

Skyrmions are considered topologically protected, i.e. they are unchangeable in their form and therefore serve as a stable data storage device. "Now that we know their structure, we wanted to know: how can this stability be overwritten?" Gräfe continued. This was necessary, he said, to be able to generate and destroy skyrmions, which store data in spintronic devices.

The tube structure provides the necessary starting point here: if the tube is narrowed to the point where it is only one point thin, the skyrmion breaks apart. At this so-called Bloch point, all directions are equal, and the tube can split and snap apart. This finding opens the door for further investigations of this so far unexplored Skyrmion spin texture.

"The project was a true interdisciplinary team effort. We had experts from a wide range of fields – from crystal preparation to modeling and X-ray microscopy," says Max Birch, a postgraduate at Durham University, who is the lead author of the publication. "The ability to bring together different X-ray instruments and techniques was crucial to the success of our project". A total of 23 authors from Germany, France and Great Britain were involved in the research work. "Thanks to the international collaboration, we succeeded in detecting these tubes – a milestone in the field of spintronics," Gräfe concludes.