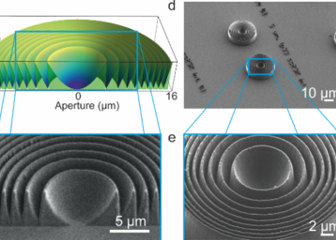 Scientists at the Max Planck Institute for Intelligent Systems in Stuttgart invented a new and cost-effective method for making X-ray lenses with nanometer-sized features and excellent focusing capabilities. By using an advanced 3D printing technique, a single lens can be manufactured under a minute from polymeric materials with extremely favorable X-ray optical properties, hence the costs of prototyping and manufacturing are strongly reduced. High-throughput and high-yield manufacturing processes of such lenses are sought after world-wide, which is why the scientists have filed a patent for their invention.

Stuttgart - X-ray microscopes are fascinating imaging tools. They uniquely combine nanometer size resolution with a large penetration depth: X-ray microscopy or XRM is the only technique where one can study buried features at high resolution. With XRM one can for instance see the defects inside a computer's central processing unit without destroying it, make micro machinery visible under working conditions, and study organelles in a cell, in their natural environment.

However, focusing of X-rays is no easy task and requires optics with extremely challenging nanoscale geometries. Owing to their complex nanofabrication method, a single lens can cost up to several tens of thousands of Euros.

A collaboration between the Modern Magnetic Systems and Physical Intelligence departments at the Max Planck Institute for Intelligent Systems in Stuttgart led to the invention of a new and less-expensive method for making 3-dimensional Kinoforms – converging lenses that are able to efficiently focus X-rays. They 3D-nanoprinted this diffractive X-ray optic. "We used a femtosecond pulsed infrared (IR) laser, and a photoresist that can polymerize by absorbing multiple infrared photons simultaneously to write structures smaller than the wavelength of light", Umut T. Sanli explains. He is a Ph.D. student in the Micro/Nano Optics group, which is a part of the Modern Magnetic Systems Department, led by Gisela Schütz. Sanli is also the lead author of the study titled "3D Nanoprinted Plastic Kinoform X-Ray Optics", which was published online in the Advanced Materials journal in July. "This way, we achieved an extremely challenging X-ray lens geometry with nanometer-size features and very high focusing efficiencies," he continues.

Fig. 1 | Overview of the fabrication method. The micrographs are imaged by a scanning electron microscope.

The X-ray optics of XRMs usually need to be replaced every year, if not more often, due to radiation damage. There are also experiments that require scores of lenses for focusing the extremely brilliant X-ray beams of the recently developed free electron lasers (FEL), where a lens is usually destroyed in a single pulse. Therefore, high-throughput and high-yield manufacturing processes are sought after worldwide. “Selecting the right materials is a crucial part of the manufacturing process” explains Dr. Kahraman Keskinbora, who leads the Micro/Nano Group. He and his team chose two-photon polymerization (2PP) polymers to fabricate X-ray lenses. “We realized that the 2PP-polymers come with extremely favorable X-ray optical properties that could only be matched by Beryllium – a highly toxic element – and Diamond, which is very expensive.” Also, Beryllium and Diamond are both very difficult to shape into the required 3D profiles at the nanoscales. “With the new invention, the printing of a lens takes less than a minute and therefore, the costs of prototyping and manufacturing of X-ray lenses are strongly reduced. Additionally, the polymer lenses are safe to manufacture and once optimized, the fabrication is straightforward,” underlines Dr. Hakan Ceylan, a postdoctoral researcher in the Physical Intelligence Department, which is led by Metin Sitti.

“We went one step forward by combining several of the lenses in series. By integrating various optics, we can effectively control and manipulate the X-ray wavefront. With several lenses and other wavefront shaping elements positioned one after the other, we can optimize these integrated X-ray optics for even the very hard X-ray energy range,” Keskinbora projects. “So, there are a lot of new research venues to follow.”

Fig. 2 | Application of 3D nanoprinting for new and advanced concepts and new type of X-ray optics.

The researchers have filed a patent application for their invention with the help of Max-Planck- Innovation, responsible for technology transfer from the research institutes of the Max Planck Society. It advises and supports scientists in evaluating their inventions and filing patents and mediates the transfer of inventions from Max Planck Institutes to industry.

Umut T. Sanli received his B.Sc. in Materials Science and Engineering from Anadolu University in Turkey and M.Sc. in Materials Science from CAU Kiel in Germany. He is currently a Ph.D. candidate at the Max-Planck-Institute for Intelligent Systems working together with Dr. Kahraman Keskinbora, Leader of the Micro/Nano Optics Group, and Prof. Gisela Schütz, Director of the Modern Magnetic Systems Department at the MPI-IS. His Ph.D. research is focused on developing X-ray optics using innovative approaches for advancing X-ray microscopy. He is skilled in various nano-engineering and characterization techniques including atomic layer deposition, focused ion beam lithography, multi-photon lithography, microscopy and spectroscopy using electrons and X-rays.

Dr. Hakan Ceylan received his B.Sc. degree in Molecular Biology at Bilkent University in Turkey in 2010. He then received his Ph.D. degree in Materials Science in 2014 at the Nanotechnology Research Center, Bilkent University, Ankara, Turkey. Since then, he has been a senior postdoctoral researcher at the Max Planck Institute for Intelligent Systems in Stuttgart, Germany. Since 2015, Dr. Ceylan has also been an associate fellow of the Max Planck ETH Center for Learning Systems.

Dr. Ceylan’s research interest are in novel materials, designs, and fabrication strategies that couple sensing, actuation and communication at microscopic length scales; with the vision of developing innovative and high-performance actuators, robots and swarm-like systems that exhibit programmed intelligence for biomedical applications.

Dr. Kahraman Keskinbora has a B.Sc. degree in Materials Science and Engineering from Anadolu University in Turkey. After finishing his M.Sc. thesis in the same university, he was admitted to the International Max Planck Research School on Advanced Materials in 2011, and moved to the Max-Planck-Institute for Intelligent Systems (former MPI for Metals Research) for his Ph.D. studies. Here, he worked on the development of new nano-fabrication approaches for novel X-ray focusing optics together with Prof. Gisela Schuütz, Director of the Modern Magnetic Systems Department at the MPI-IS. Keskinbora finished his Ph.D. with distinction in July 2015, and since then, he is leading the Micro/Nano Optics Group in the Department of Modern Magnetic Systems. His research covers the development of materials, lithography processes as well as innovative kinds of X-ray optics, mainly by utilizing ion beam lithography and micro/nano-machining.

Professor Dr. Gisela Schütz is the Director of the Modern Magnetic Systems Department at the Max Planck Institute for Intelligent Systems in Stuttgart. Her research interests cover the application of synchrotron radiation in X-ray spectroscopy and microscopy and the development of advanced spintronic/magnonic systems and new supermagnets.

Schütz was born in Ottobeuren in Southern Germany in 1955. She studied physics at the Technical University of Munich (TUM) until 1979, and in 1984 she received her doctorate from the Chair of Nuclear Physics at TUM.

There she started with research activities in the field of condensed matter with synchrotron radiation. She worked at several synchrotron laboratories and developed new methods of studying magnetic structures and phenomena with polarized X-rays. After qualifying as university lecturer in 1992 in experimental physics, she became a professor at the University of Augsburg in 1993 and received a chair at the Institute for Experimental Physics at the University of Würzburg in 1997. In 2001, the mother of three children became Director at the Max Planck Institute for Metal Research, now the Max Planck Institute for Intelligent Systems.

Dr. Metin Sitti is the Director of the Physical Intelligence Department at the Max Planck Institute for Intelligent Systems in Stuttgart, and a Professor in the Department of Mechanical Engineering and Robotics Institute at Carnegie Mellon University in Pittsburgh.

Sitti received his BSc and MSc degrees in electrical and electronics engineering from bogazici University in Istanbul in 1992 and 1994, respectively, and his PhD degree in electrical engineering from the University of Tokyo in 1999. He was a research scientist at UC Berkeley during 1999 and 2002. Since then, he has been a Professor in the Department of Mechanical Engineering and Robotics Institute at Carnegie Mellon University in Pittsburgh. In April 2014 he became one of seven Directors at the Max Planck Institute for Intelligent Systems.

Sitti and his team aim to understand the principles of design, locomotion, perception, learning, and control of small-scale mobile robots made of smart and soft materials. Intelligence of such robots mainly come from their physical design, material, adaptation, and self-organization more than to their computational intelligence. Such physical intelligence methods are essential for small-scale milli- and micro-robots especially due to their inherently limited on-board computation, actuation, powering, perception, and control capabilities. Sitti envisions his novel small-scale robotic systems to be applied in healthcare, bioengineering, manufacturing, or environmental monitoring to name a few.